You are here: Home / Uncategorized / Natural deodorant or not?

First I wanted to say that there is research that covers both sides of this issue and I think it is up to us as consumers to make the rights choices for the safety of our bodies. Research is everywhere but a few places you can go for both sides are http://www.webmd.com and http://www.cancer.gov.  Each of these sites have journals arguing for each side of this debate and feel it is important to educate yourself on whats out there and make your choice from there. This just happens to be a choice I have made for myself and wanted to share what I have found.

In the last five years I have been switching to more natural products, but also products that work as well. So the hunt began for an all natural deodorant.  Up first was the Schmidt’s Natural Deodorant.  My initial reaction to this deodorant was that the scents were nice and natural and they seem to work well in the beginning.  Unfortunately after using them for a few months I developed a terrible itchy rash in my armpits and had to discontinue using them. I will note that i tried a few different scents from them before stopping thinking that it may have been a particular scent from them that was bothering me.  I also noticed that after having used the deodorant a few times it would become very sticky almost and difficult to spread.

So the search continued.

For several months I scoured the health stores in search of the perfect natural deodorant, none of those that I purchased and used were worth a mention here because they did not work at all. Either they irritated my underarms or they did nothing to stop the sweat and smell or were just difficult to put on.

I started noticing a ton of ads on facebook for NATIVE Deodorant and decided to take the plunge since I had no luck with anything else I had tried.  I ordered a sample kit of travel size deodorants in several scents and begun to test them. 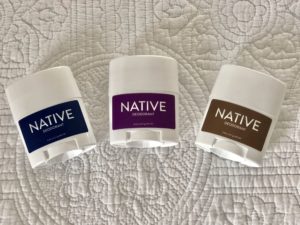 There were actually six travel size deodorants in this set, but as you see here I have already used three of them.  I absolutely love these deodorants. They have great consistency and never get to where they are difficult to put on, which was a plus. They really helped slow my perspiring and have helped with the smell perspiration for me.  I have used three different scents and have not developed a rash at all.  These have been my favorite and they have continued to work for me.

Summer is quickly approach so that will be the true test of these products, but I feel certain that they will continue to do the job.  If you have not jumped on the natural deodorant train yet and are looking to make a change, NATIVE Deodorant may be right for you as well. Go ahead give it a try. You can order your NATIVE DEODORANT  at https://www.nativecos.com.